We took this photo a few days ago. We were heading to the National Gallery in London to research on Leonardo da Vinci for an educational project we are working on and we found ourselves in the middle of a big Extinction Rebellion protest against climate change, right in front of the museum. The contrast between the two situations could not have been starker. In the square, thousands of people were creating the most impressive and extensive act of civil disobedience we’ve ever seen. The atmosphere was surcharged with playful creativity, gentle determination and a real sense of emergency.

Inside the National Gallery, on the contrary, everything was just museum business as usual: masses of visitors slowly zombie-walking from room to room, wandering from mythological scenes to religious depictions barely understandable or relevant to us nowadays. We couldn’t help remembering the Futurist poet Marinetti, who accused museums of being cemeteries and advocated flooding them in order to bring life into art.

Yet after a while we started realizing that there was a subtle but deep connection between the energetic urgency outside and the unnatural quiet inside. Renaissance painters were deep observers of nature; Leonardo da Vinci famously said that painting is always painting nature. It is not true that ancient collections are unrelated to modern challenges – on the contrary, they can help heal the fractured relationship between us and the ecosystems we are progressively destroying. 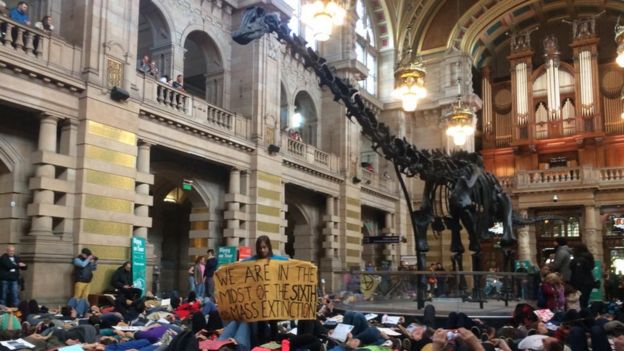 A powerful reminder of this is how Extinction Rebellion is using museums for their protest. For example they organized a visually mesmerizing “die-in” at the Kelvingrove Art Gallery and Museum, right under the skeleton of an extinct dinosaur, therefore giving new meaning to museum collections.
On the other hand, museums are starting to meet XR activists and some are even starting to collect Extinction Rebellion artefacts.

What should we do then? There is an intense debate going on about social impact and social responsibilities of museums (check out for example Museumnext website). Our take is that the first thing needed is a deep commitment by us museum professionals at an emotional, personal level.

It is not something for an institution-first approach in my opinion: individuals must first accept in their own heart and soul that this is an emergency, and start modifying their activities accordingly, for example inserting references on sustainability and climate change in their own cultural productions. Entire ecosystems were destroyed by humans, starting from ancient times; for example Sicily and northern Africa were green and fertile before Roman domination. We played an essential part in the extinction of countless species that now live only in museums. Museum collections are therefore full of hints we can use to raise awareness, and this is up to us individuals.

If you wish to receive our newsletter on our latest projects and events please use the subscribe button below.

We use cookies to ensure that we give you the best experience on our website. If you continue to use this site we will assume that you are happy with it.OkRead more